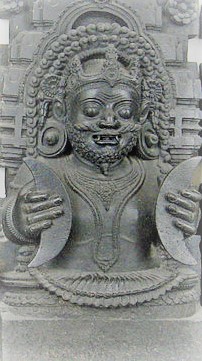 American theosophist, esoteric astrologer and author. Unhappy in youth, she broke away from her early environment when she was 22. She married Walter Evans, an Episcopal rector, and had three daughters with him. While studying the occult, she became an evangelist and social worker. In 1919, she made contact with «the Tibetan;» two years later she founded her Arcane School. Her second marriage was to Foster Bailey. They organized the International Goodwill Movement together and, by 1939, had centers in 19 countries. Bailey wrote 30 metaphysical books on ancient teachings. 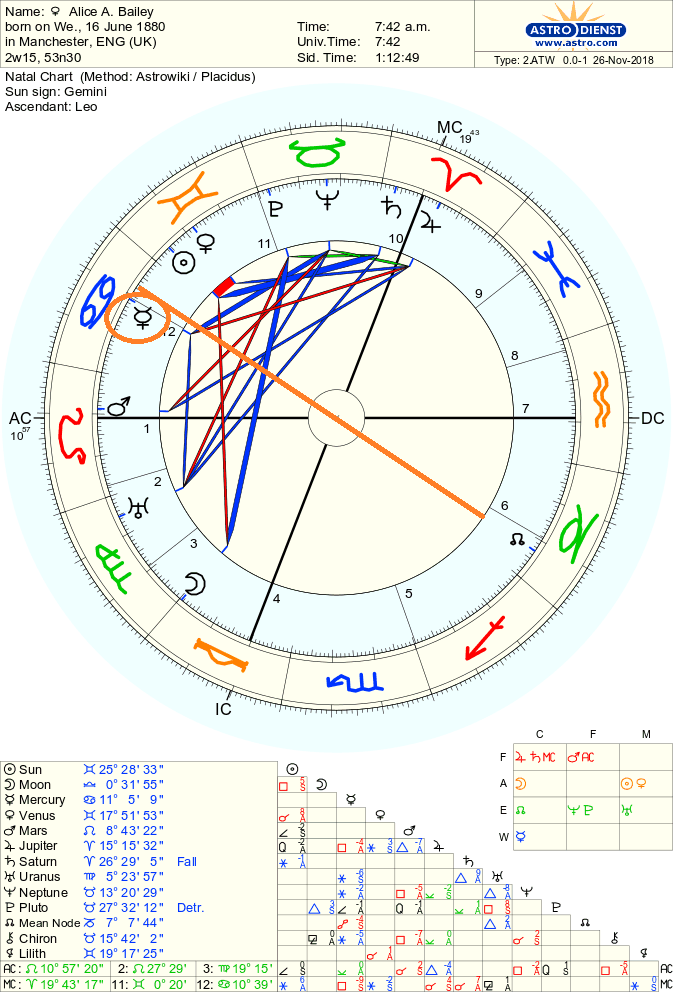 American business administrator and noted family, the son of the founders of the religious cult, «The Mighty I Am.» Along with his mom, he was charged with 22 counts of mail fraud, conspiracy and plagiarism in 1940. They were convicted on two counts of financial misconduct, but the conviction was overturned in 1946. The movement remained mighty throughout the ’60s. 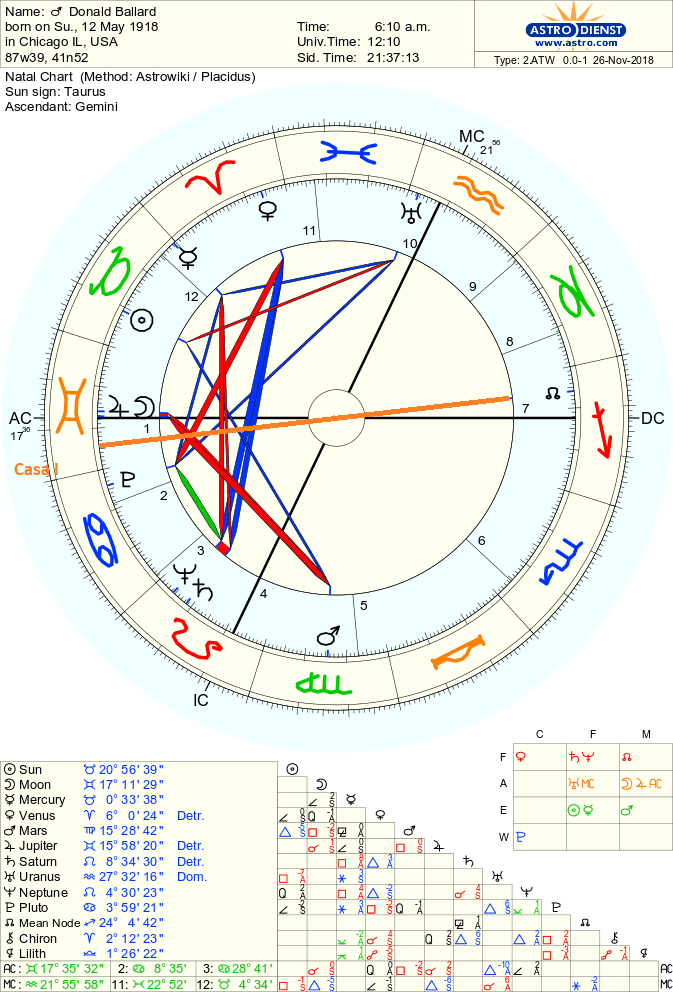 British-Indian social reformer and feminist at the forefront of liberal movements for 60 years. Her family background was genteel, though her father was from an impoverished branch and died when Annie was only five. Deeply religious as a child, she longed to serve humanity with some sort of glorious martyrdom. She was married to a dour Anglican clergyman, Frank Besant, in 1867 which was apparently a type of martyrdom in itself; the marriage lasted for six years. Leaving him at age 27, she had an alimony income of 110 pounds per annum, a comfortable if not extreme fortune. Taking up the worthy cause of birth control, Annie was arrested and tried in 1877 on a morals charge for her publication written with Charles Bradlaugh, «The Fruits of Philosophy.» The litigation cost her the custody of her two children and her alimony. An attractive, feminine woman, she held a fiery sword in her public demonstrations.

Annie met Mme Blavatsky in the spring of 1889 and was greatly taken with her and with the doctrine of Theosophy.

From 1907 until her death, Annie served as the President of the Theosophical Society in India. She took the young Krishnamurti under her wing in 1909 and nurtured him as the New Avatar, the Messiah, until he broke with the society in August 1929. Annie loved pomp and ritual and occult ceremonies, and kept opening new chapters and new societies within Theosophy. On 1/11/1911, she founded the Order of the Star in the East with the 16-year-old Krishnamurti as the official head. In spite of her living link with the Mahatmas, the society was fraught with intrigue, spiritual competition, power-struggles and scandals.

In 1922, Besant arrived in Ojai, CA with Krishna and his brother Nitya, who had TB, believing the warm dry air would help the youth. It is written that Krishnamurti experienced a kundalini awakening in August 1922. He remained in Ojai when Annie went back to India but they retained a deep affection. When Krishna finally broke with the Theosophical society in 1929, Anne was nearly completely senile and never realized that her cultivation of the Matreya had been denied by the embodiment himself. When Krishna visited her for the last time, early in 1933, she hardly knew who he was, and she died on 9/20/1933, Adyar, India. After 27 years as president of the Society, she was succeeded by George Arundale. 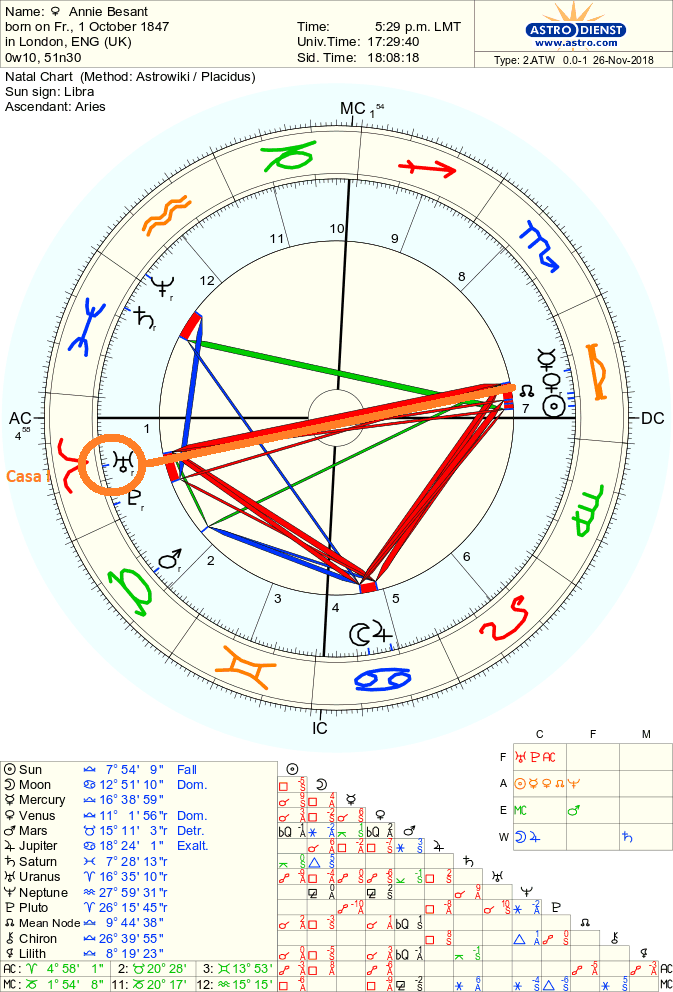 Russian spiritualist and mystic, the founder of the Theosophical Society. Her personal history changed frequently with a number of fanciful and glamorous versions but she was certainly a keen reader and writer and an accomplished pianist. The daughter of minor Russo-German aristocrats, she married Nikifor Blavatsky, vice-Governor of Yerevan in the Caucasus on 7 July 1848 when she was 17 and he, over 40, and fled from him a few weeks later. From then on her adventures – and her stories – changed often. She spent many years traveling the world in a mystical search for answers, eventually meeting two ascended Masters, Morya and Koot Hoomi.

Heavy-set and morbidly obese by the end of her life, Mme HPB, as she was known, had magnetic eyes and crinkly hair. She smoked incessantly and talked incessantly in a guttural voice, often witty and vulgar. She cared not a hoot for convention and was humorous, impulsive and warm-hearted.

After reaching the U.S. in 1873, she met Colonel Henry Steel Olcott in 1875; together in New York City, they founded the doctrine of Theosophy. She wrote the huge volumes of «Isis Unveiled» in 1877 and «The Secret Doctrine» in 1888. In February 1879, they moved to Bombay to set up chapters of the Society in India. 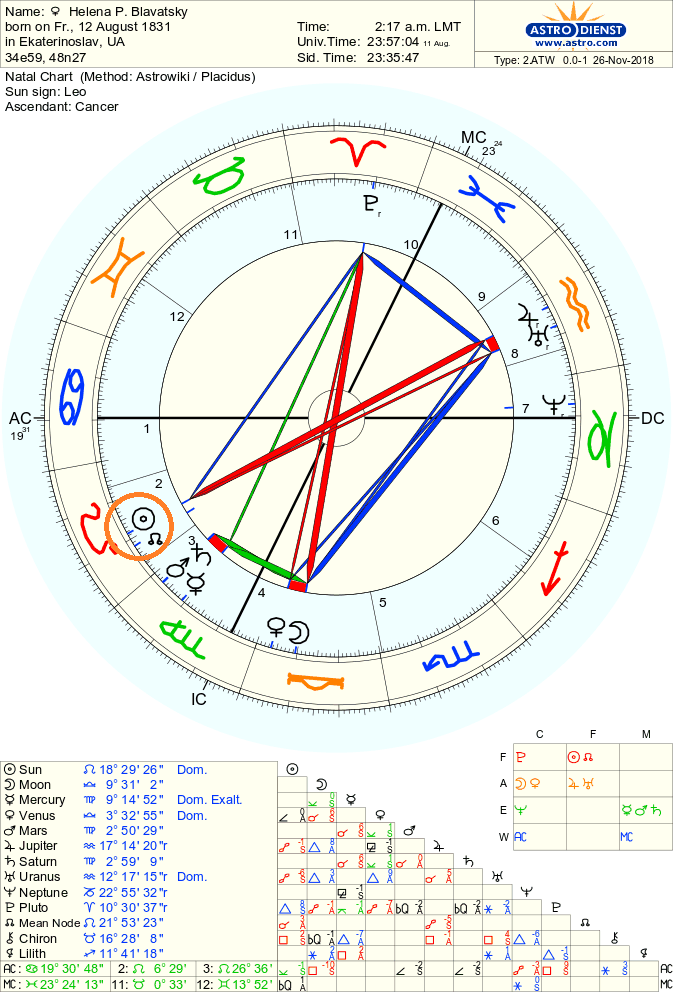 Scottish metaphysician and author of «Reappearance of the Christ» and «Messages from Matreya.» A student of the Alice Bailey teachings for 30 years, he is an inspiring teacher and writer. Touting the return of the Christ for some time, he established a credibility gap after he announced a specific day for Christ to reappear publicly in 1982. He said that the Messiah has been living in London since 7/19/1977, giving him direct telepathic messages.

For more than 20 years, Creme has been a follower of New Thought philosophy and the teachings of the Theosophical Society. His lectures and tours are arranged by the Tara Center in Los Angeles, for which he says he receives no fees. They publish and sell his books and tapes. 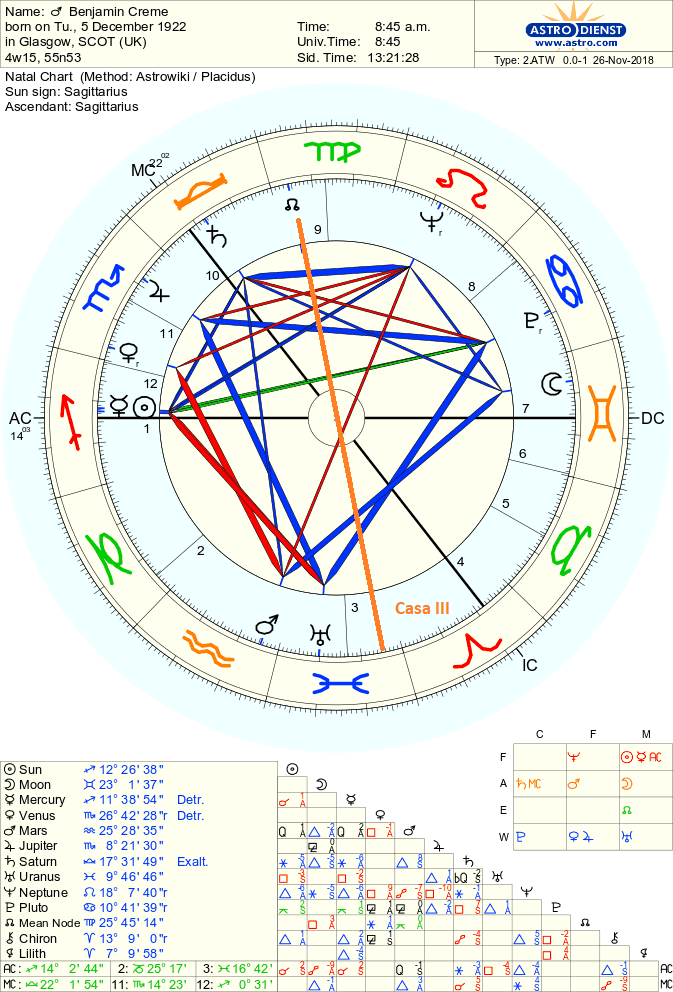 American clairvoyant and medium, the most amazing exemplar of his era, sought by the rich and famous for readings. He was an ordained minister at 25 for five years. After seeing visions and hearing voices, he lectured with clairvoyant demonstrations and leaving the ministry, became a spiritualist pastor. 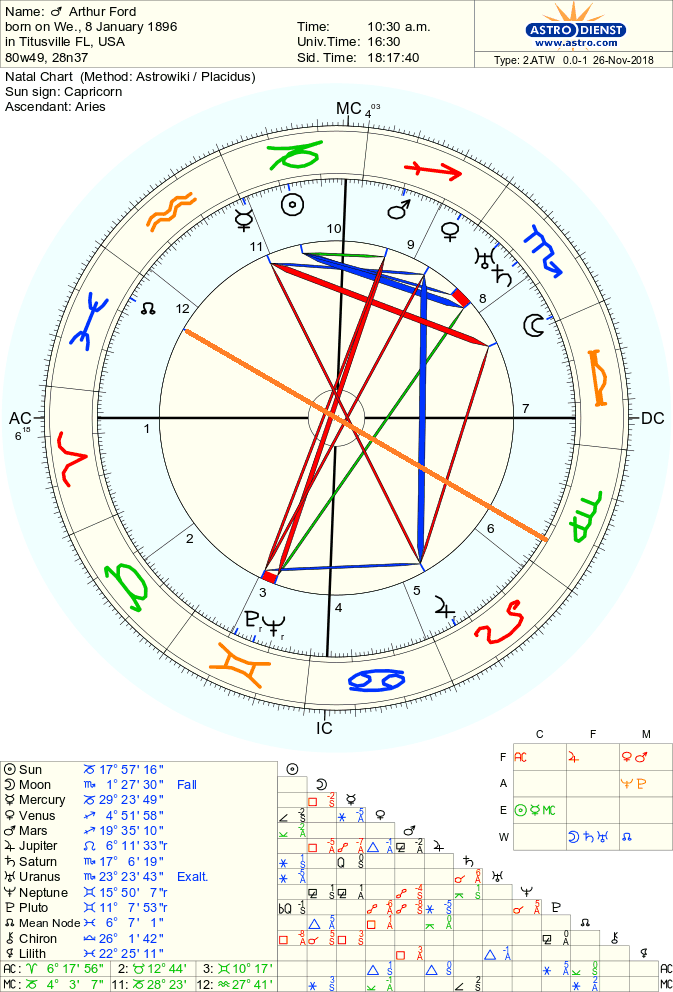 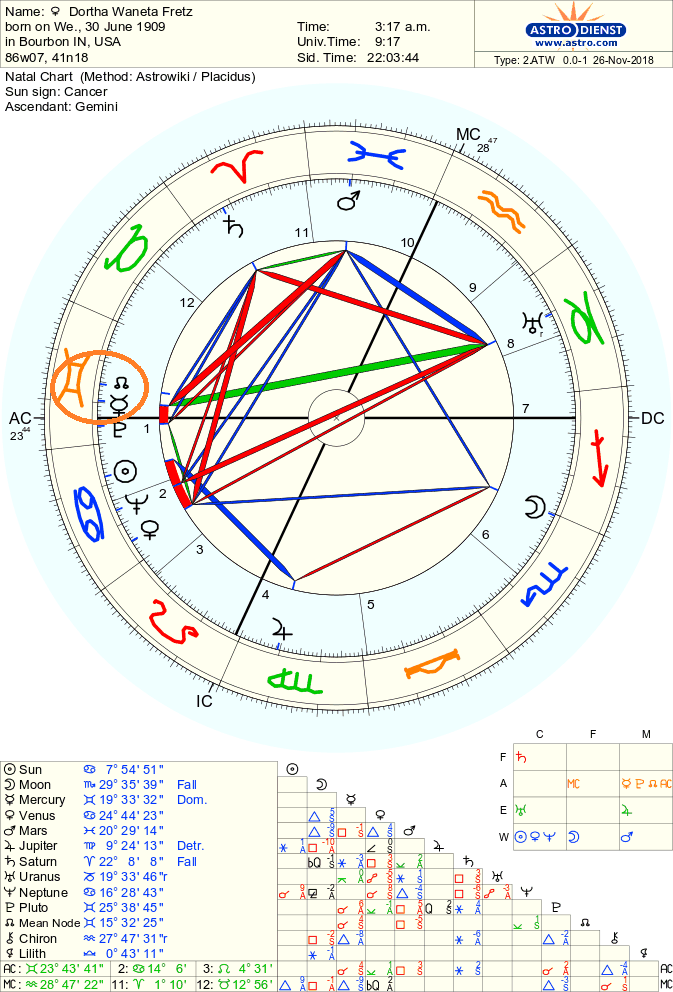 Dutch musician and psychic. With his brothers Ben en Henk Groote and Cor Mestenbeld, André was from 1976 till 1980 involved with the Dutch close harmony band «Air Bubble». In 1976 they had some success with the song Racing car, that entered the Dutch Top 40 on 7 August 1976 and peaked at place 7.

The black hole show of Veronica lasted till 1994. It raised the interest in occult matters and had two direct spin-offs:

The first was a monthly magazine about spiritual and paranormal topics called «Paravisie» (paravision) in May 1986. The first editor was Carel Elias (pseudonym of Leo de Ruiter, chief editor of the «black hole» radio show). The current editor is the jurist Pepita de Jager (b. 1968). The website of the glossy dealing with the paranormal and astrology is found at http://www.paravisie.nl.

The second spin-off was the establishment of the «Paranormale beurs» (Dutch Psychic Fair) on 1986 (Den Haag), an annual commercial event where providers in the alternative fields show their products or services to interested visitors. The agenda of it is found at the related quarterly Paraview spiritueel Magazine at http://www.paraview.nl.

In 1980 André Groote published «Door de wind verteld» (Tales of the wind). His last CD was called «De levensdraad» (The tread of life). 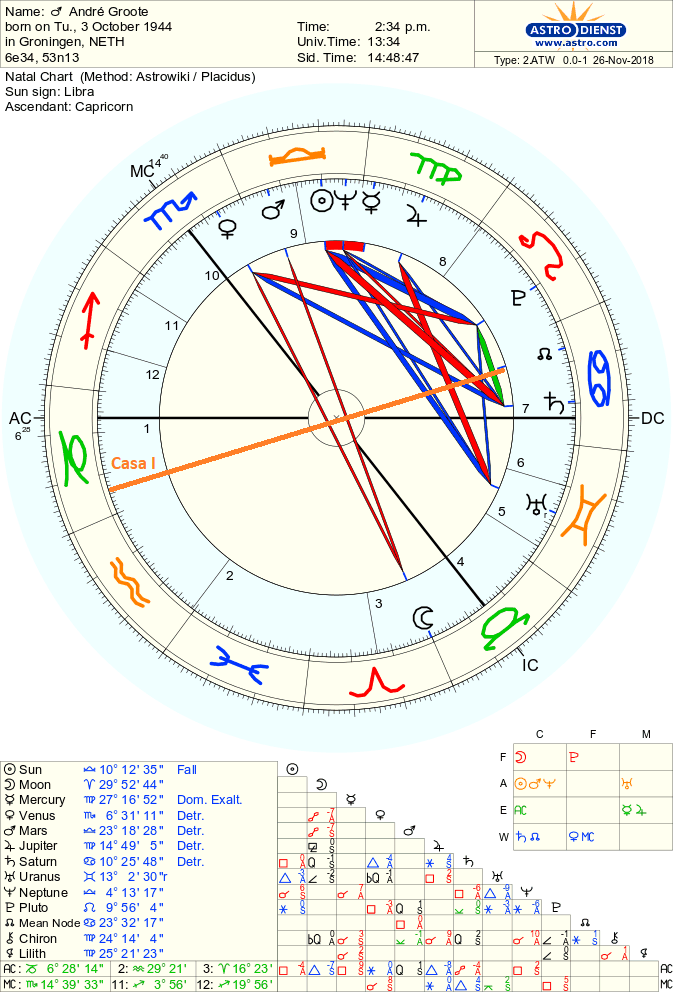 Throughout her life, Faustina reported having visions of Jesus and conversations with her, of which she wrote in her diary, later published as The Diary of Saint Maria Faustina Kowalska: Divine Mercy in My Soul. Her biography submitted to the Congregation for the Causes of Saints quoted some of these conversations with Jesus regarding the Divine Mercy devotion.

At the age of 20 she joined a convent in Warsaw, Poland, was later transferred to Płock, and then to Vilnius where she met her confessor Father Michał Sopoćko, who supported her devotion to the Divine Mercy. Faustina and Sopoćko directed an artist to paint the first Divine Mercy image, based on Faustina’s vision of Jesus. Sopoćko used the image in celebrating the first Mass on the first Sunday after Easter. Subsequently Pope St. John Paul II established the Feast of Divine Mercy on that Sunday of each liturgical year.

Faustina died at the age of 33 on 5 October 1938. The Roman Catholic Church canonized Faustina as a saint on 30 April 2000, considering her a virgin and mystic. She is venerated within the Church as the «Secretary of Divine Mercy». 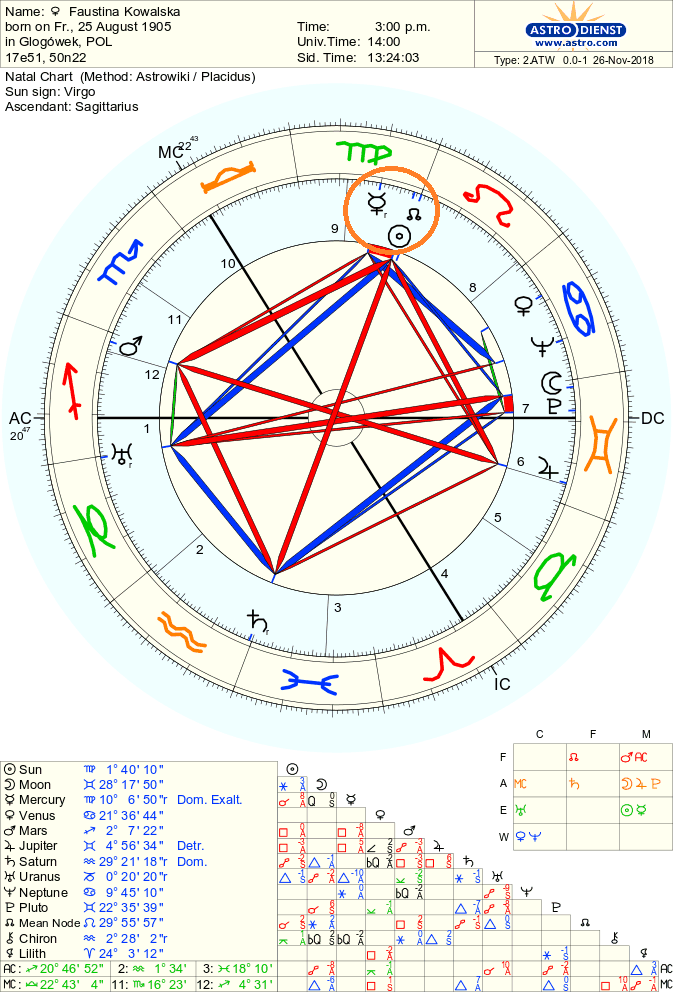 American Satanist and author of «The Satanic Bible.» He was the founder of the Satanic Church in San Francisco, incorporated on 30 April 1966 with reportedly a million followers.

As a child of seven he studied the supernatural, moving into black magic by high school. He was a high school drop-out to hang around pool halls. Musically gifted, he become the second oboist in the San Francisco Ballet Orchestra at 16. Joining the circus in 1947 he became a lion trainer, calliope player, hypnotist, palmist, phrenologist, magician and a burlesque accompanist. He held many jobs throughout his life, including being an assistant criminologist in the San Francisco Police Dept. in 1951.

Lavey established a cult on 30 April 1966, holding Friday night seminars where he displayed his full drama with a flowing cape and macabre decorations. His mass included a nude woman draped over the alter and he reportedly served a baked cadaver at one time. Not averse to publicity, he displayed his pets that included a tarantula, a leopard and a lion. His cult celebrated carnal indulgence, vengeance and the rule of Satan. With charismatic power and keen intelligence, he was typecast as the Devil in the movie «Rosemary’s Baby.»

He married a 17-year old in 1960 after divorcing his first wife; two daughters. 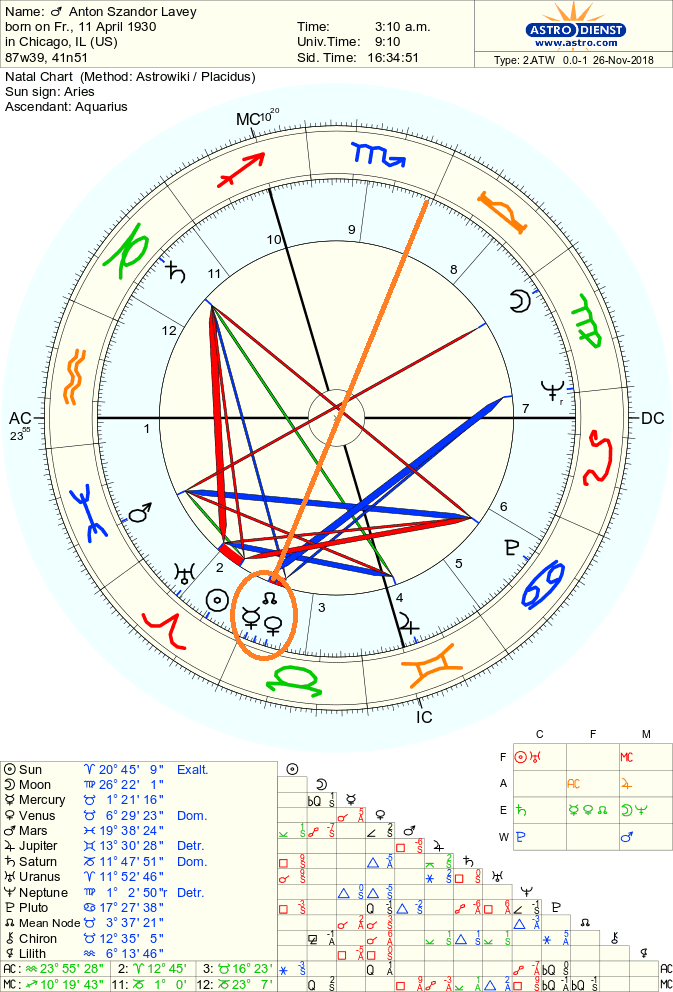 Jamaican clairvoyant, faith healer, advisor and minister who was assigned by British Intelligence, at the age of 16, to work on the invasion of Normandy as a psychic spy, as reported by Clifford Linedecker in the 1976 book «Psychic Spy.» The founder of a spiritual church in Los Angeles, he claims 99% accuracy in predictions which include that of a 1983 California earthquake strong enough to be felt in Alaska. (Did not happen)

He states that he sees the future as a movie and claims that he wrote to Britain’s queen to warn her of Diana’s upcoming death. 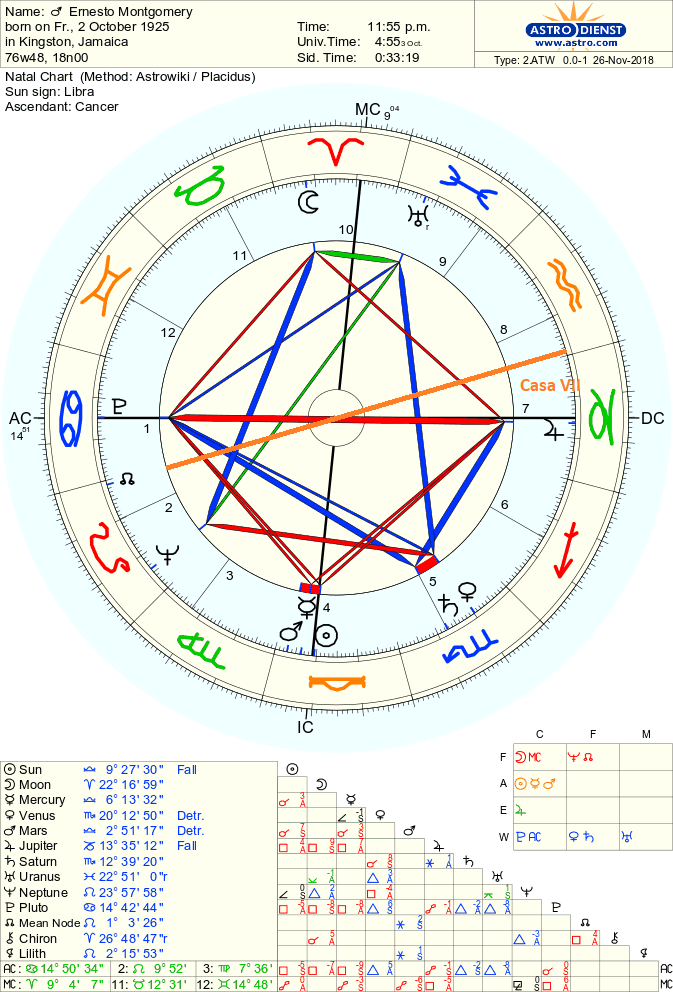 British occultist, the prolific spokesman for the «Hermetic Order of the Golden Dawn.» He began his esoteric study with Alastair Crowley in 1928, working as his secretary and joining the Golden Dawn in 1934. Noted for balance and accuracy in his work, Regardie’s books include «The Tree of Life» and «The Middle Pillar. 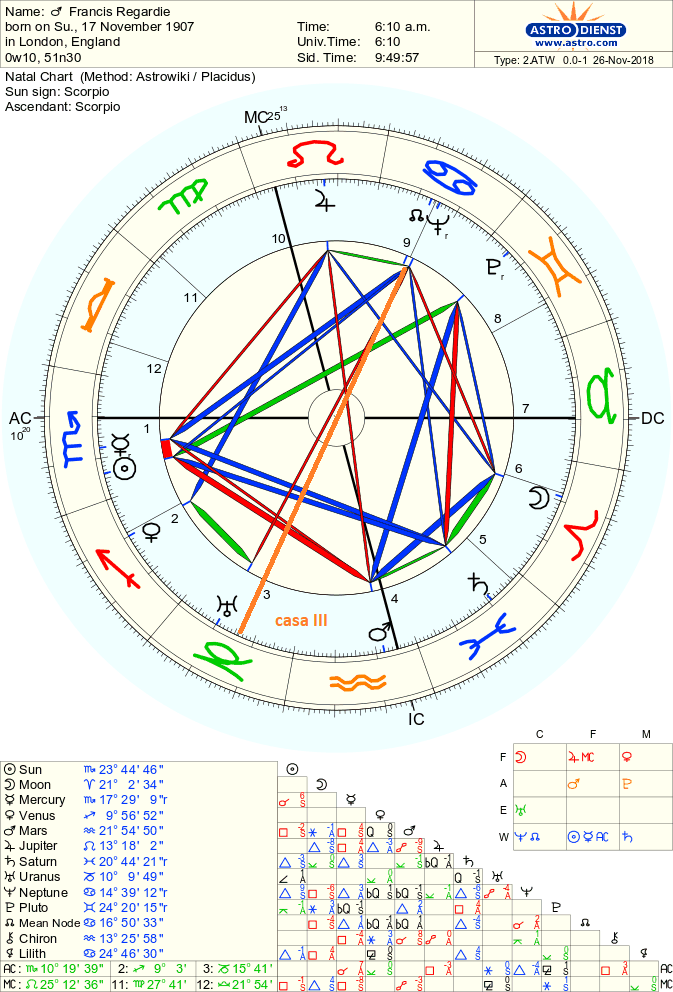